Tel Aviv is Israel’s second largest city. It was founded in 1909. Tel Aviv is considered to be “the first Hebrew city”. Tel Aviv and Jaffa merged into one municipal authority in 1949. Tel Aviv is located on the shore of the Mediterranean Sea (to the west), the cities of Ramat Hasharon, Herzliah and Kfar Shmaryahu in the north and in the east are Savyon, Givataim and Ramat Gan.

The population of Tel Aviv is more than 400,000, of which almost one-third are between the ages of 18 and 34. The hinterland of Tel Aviv includes the cities to the north, south and east with a population exceeding 1.5 million. During the day, the population of Tel Aviv increases significantly since it is the business hub of Israel and the head offices of most of the financial institutions as well as law and accounting firms are located in Tel Aviv as well as the headquarters of Israel’s leading business organizations..  Tel Aviv University has 37,500 students. The economic-social ranking of Tel Aviv is 8 out of 10.

Tel Aviv is a vibrant city – “a city 24 hours a day” with a large variety of cultural activities, art galleries, museums, restaurants, coffee shops and shopping centers. English speakers and those who speak other languages will find a large selection of movies, concerts, dance presentations and operas as well as the beaches, the Tel Aviv port, the marina, the “station”, the Hayarkon park, etc as a source for recreation and entertainment.

Relocation to Tel Aviv is particularly suited for expats, members of the diplomatic corps, bankers, and managers who would like to reside near their offices.

We recommend renting an apartment in one of the new residential towers, where there is a concierge that can assist expats on a daily basis. There often are other amenities available in residential towers, such as a swimming pool, gym and a tenant’s lounge.
Among the residential towers which were built in Tel Aviv in the last decade, are the Elrov (Akirov) Towers, Rothschild 1, the Beeri-Nehardea towers, Beit Hanna, Frishman 46 tower, Gan Hair, G-tower, Manhattan tower or the Yoo towers in the Tzameret park.

It is more comfortable to reside in a building that provides management services on a 24/7 basis. The towers are located in central locations in the city, making it possible to reach other destinations in the city either by taxi, a bike or even walking. We recommend to select a taxi driver that you can call upon on a regular basis, a recurring relationship with the taxi driver will provide an additional benefit of having someone who can provide a great deal of pertinent information. Seeing a familiar face is an additional benefit for someone whose permanent residence is many miles away.

There are 4,000 buildings in Tel Aviv that were built in the Bauhaus style, designed by German Jewish architects that emigrated to Palestine during the 1930’s. Bauhaus was the name of an influential design school in Germany and the international architectural style with the following characteristics: functional design, not necessarily symmetrical, the building is located in the middle of the plot, which leaves room for a garden or open area for the tenants, there is a repetitive feature throughout the building, such as round windows in the stairwell to allow for lighting. The Bauhaus buildings have wide balconies and iron railings. The windows, shutters and stairwell railings are made of wood and the exterior of the building is covered with white plaster –from which the name “the White City” is derived. In 2003 UNESCO declared Tel Aviv as a historic cultural center named the “White City”.

The Templar buildings were built in the latter part of the 19th century by Germans who moved to Palestine. They have recently been restored to their original glory. The buildings were made of brick with German motifs combined with eastern-style arches and a triangular gable on the roof and a wooden balcony built above the entrance to provide cover from the sun and the rain.

There are several special neighborhoods in Tel Aviv: Neveh Tzedek – the first neighborhood built out side old Jaffa and the Yeminite Quarter near the Carmel fruit and vegetable market. 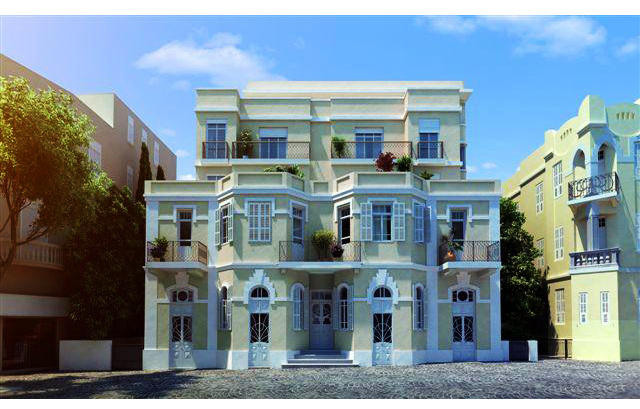 The name Tel Aviv signifies the combination of the ancient – an archaeological Tel and Aviv, which means “spring” when the flowers blossom and everything rejuvenates. Tel Aviv is the name given to Theodor Hertzel’s book “Altneuland” – German for “Old-New land” in which Hertzel described what the Jewish state would look like when it will be established. The biblical source of the name is from the book of Ezekial: “and I will come to the diaspora Tel Aviv on the banks of the river”. That is the campsite of the Jews exiled to Babylon.